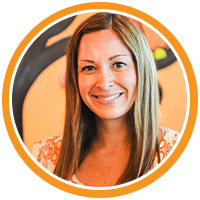 Antonia is a mom of three, television and film producer, entrepreneur and founder of Zooga Yoga, She is a go-getter who is fueled by her passion for children, wellness and entertainment. After graduating from USC with a BA in Film & Television, Antonia enjoyed a career as a producer working for Pixar, Disney, Fox, Sony and MTV. Antonia developed a lifelong love of dance and performance that began in childhood through ballet, contemporary dance, musicals and television.

As an adult, she studied dance, Pilates and yoga for more than 20 years. In 2012, Antonia combined her expertise in yoga and entertainment to create “Zooga Yoga,” a uniquely branded yoga studio with programs for kids and families and branded products such as books, music, yoga cards and yoga gear for kids. Today she continues to run her LA-based studio while working to expand Zooga Yoga across the US. With her husband, Chris, and their three kids, Antonia is truly living her dream, bringing the Zooga YogaPlay® interactive experience to children and families everywhere.